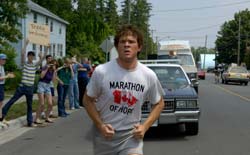 Although it has been 25 years since he pounded the pavement during his Marathon of Hope, Terry Fox’s image still looms large in the collective consciousness of Canadians. We still honour him in many ways. Last year, 1.3 million people took to the streets to participate in Terry Fox fundraising runs across the country. This year, his image is even on the dollar coin. Scores of Canadians have very personal memories of Fox and I am like them in that regard. And so, I watched a rough cut of Terry, CTV’s new two hour biographical TV movie, with some apprehension. After watching it, I’m thrilled, even relieved, to recommend Terry, a commemorative project that deserves the highest praise for dignifying the memory of its subject. Directed by Don McBrearty, the movie strikes a balanced, unsentimental tone. There’s no need to lionize a true hero and, wisely, the filmmakers haven’t done so. “I’m so proud of what we’ve done,” says Shaftesbury Films’ Christina Jennings, the movie’s executive producer and the driving force behind the project. And she should be.

Terry opens with images of Fox (played by British Columbia’s Shawn Ashmore) in Newfoundland, filling a jar with water from the Atlantic Ocean and announcing his plans to pour it into the Pacific Ocean. Fox’s journey began on April 12, 1980, when he dipped his artificial leg into the icy Atlantic near St. John’s, Nfld. He was then a 21-year-old university student who had lost his right leg to cancer three years earlier. Fox had planned to run across Canada to raise money for cancer research—a dollar for each Canadian became his target. It was a remarkable goal set by an unknown young man from a large, working-class family. Fox was part of an even larger family, though. By the time the Marathon of Hope was cut short on Sept. 1, 1980, he had become Canada’s son. The bright-eyed, good-looking young man from Port Coquitlam, B.C., had run a marathon a day, every day, for almost five months. The best in him, his strength and purity of spirit, brought out the best in all of us. All Canadians were proud. And the subsequent news that Fox’s cancer had spread into his lungs shocked a nation.

I first learned of Fox’s run shortly before he arrived in Ottawa on June 29, 1980. I was then 15, a teenager who loved spending weekends at an eastern Ontario campground with pals, including my 16-year-old friend Pat, who had the most wicked sense of humour of anyone I’d known. Like Fox, Pat was athletic, freckle-faced, blue-eyed, curly-haired—and had lost a leg to cancer. He awed those around him, especially adults, with his determination to be unaffected by his loss. Pat seemed fearless. He rarely complained. He rarely asked for help. His three brothers called him “Trooper,” which was also the name of a hot band at the time. On a particularly muggy day, one of Pat’s brothers told us about Fox’s run and his pending arrival in Canada’s capital. The more something impressed Pat, the less he said. Discussion about Fox left him silent; it filled me with optimism.

Terry reveals the hopefulness and determination that drove Fox. It unfolds from his perspective, which hasn’t been seen before. Vancouver-based screenwriter Dennis Foon exhibits a deft hand, and was able to craft the script with unprecedented access to research material, including Fox’s diaries. The movie shows how incredibly savvy Fox was about human nature. He insisted that all money raised go to research. He never accepted a cent of payment and insisted on wearing clothing without labels or logos, so that he couldn’t be accused of endorsing a company. Fox seemed to have an inherent understanding of people, although he likely never guessed how he would be embraced. His wisdom and sheer determination are brought to life by Ashmore’s performance. Best known for playing Iceman in the X-Men movies, the sweet-faced actor captures Fox’s spirit and concern for children while admirably conveying the young man’s humility. “And getting his physicality right was really important,” says Ashmore, who does a great job of replicating Fox’s gait. (The artificial leg is computer generated.) Ashmore admits to being “incredibly nervous” about how the film will be received. He needn’t worry. The movie powerfully recreates the run’s end, when Fox told reporters from a stretcher that he had to return to B.C. for treatment. It will bring back memories of his unyielding courage, which was then so evident. He, the hero, cried and promised us, the onlookers, that he’d resume the run if he could. Fox died on June 28, 1981.

Many years later, in 1999, I met Terry’s mother, Betty Fox, at an awards ceremony in Vancouver. Like thousands of others have surely done, I shared with her what Terry meant to me. And I told her about my friend Pat, who was so like her son, and told her what Terry meant to him. She asked how Pat had fared, and squeezed my hand when I told her that he died six months before her son. Terry is part of a weekend tribute to mark the Marathon of Hope’s 25th anniversary. Fox was once quoted as saying, “I remember promising myself that, should I live, I would prove myself deserving of life.” Terry shows how he proved that over and over again on Canada’s highways.
—Cover Story by Alison Cunningham, TV Times