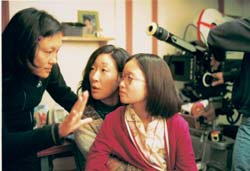 “With the sure hand of a skilled miniaturist, Mina Shum has crafted a nearly flawless film in Long Life, Happiness And Prosperity, a movie that, like an Alice Munro short story, locates the universal in the particular. The action all takes place within a few blocks of a grimy downtown Chinese neighbourhood in Vancouver. Twelve-year-old Mindy Ho (Valerie Tian) is studying a book of Taoist magic in an effort to improve her mother’s fortunes and bring her happiness.

Sandra Oh plays Kin, a hard-working single, slightly hardened mother who works extra shifts in a restaurant and moonlights as a telephone psychic to pay the bills.Two secondary stories are intertwined with theirs: Shuck Wong (Chang Tseng) has lost his job as a security guard in a shipyard just a few years shy of his retirement date. He conceals his firing from his wife Hun Ping Wong, who, trying to overcome the loss of a daughter who has grown up and left home, connives to bring romance back into their marriage. Bing Lai (Ric Young) works at a butcher shop. He is powerfully motivated to make good after being rejected by his father, who hasn’t spoken to him for 20 years. Bing sets himself up for his own parental disappointment by encouraging his own son to become a butcher. The son has other ideas: he wants to become a Buddhist monk.

Oscillating between gentle humour and harsh reality, Long Life, Happiness And Prosperity is an urban fairy tale that charms us into a willing suspension of disbelief. Mindy’s first experiments with Chinese magic backfire. But not entirely. Her mother doesn’t win the $250,000 Dragon lottery, but Bing does, after stepping in the path of Mindy’s opposing mirrors and magic pebbles. In an effort to spur romance between her mother and Alvin, the restaurant manager, Mindy buys a love potion and puts it in their tea. Nelson, Bing’s boss, comes along and after drinking the tea intended for Kin, becomes the object of Alvin’s affection.

Shuck’s despair over joblessness leads him to the brink of suicide when he spots a missing turtle- brought back when one of Mindy’s magic rituals works.

There’s irony in the way that Canadian-born Mindy embraces old-world beliefs while her mother rejects them. Shum and Foon have crafted a story that turns on a subtle interplay of Chinese and North American cultural conventions.Little gestures elucidate the unspoken: A little boy wearing a Chinese mask on the back is a symbolic reminder of the ever-present danger of losing face that plays a part in each of the stories here. Shum’s direction, seeming to draw on Asian dramatic conventions that stress facial expression, wrings some captivating performances from her actors, especially Oh and Tian- a remarkably adept young actor- Ric Young and Chang Tseng.

On these garbage-strewn streets, where survival is never easy, miracles are made.”
—Susan Walker, Toronto Star

“Long Life, Happiness and Prosperity is the type of film tailor-made for a company like Film Movement. It is hard to imagine any subscriber to Film Movement being very disappointed in Long Life, Happiness and Prosperity, a low-budget Canadian independent film written and directed by Mina Shum. This is the exact type of film that viewers outside of New York and Los Angeles never get to see: Sensitive, filled with nuance and dramatic without resorting to sex, violence or CGI effects. In short, it’s a beautifully scripted, well-performed hidden gem.

Amazingly, with the number of characters involved and only one (Oh, a series regular on Arliss) being truly “recognizable” for outside work, it is easy to keep everyone’s respective roles straight. Not only is that a tribute to the individual actors involved, but also to Shum’s writing ability. She has created a full ensemble of believable, three-dimensional characters that are so interesting that each stands out for some reason. Valerie Tian, despite her young age and inexperience (In the director’s commentary, Shum says this was her first time ever on a film set!), is outstanding as Mindy. The relationship between her and Oh is perfect because there are no moments where they try to show the audience that they are daughter and mother. The script tells us that; there is no need for Oh to play the doting mom for a moment and kiss her on the forehead or wipe something off her cheek. That type of storytelling without consciously playing for the audience is much more difficult than it sounds, and Tian and Oh do it well.”
—Robert Spuhler, DVD Talk