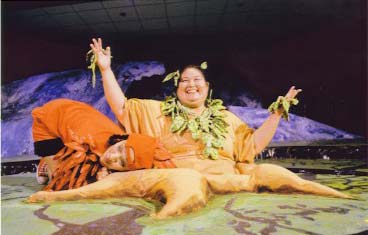 I love this play. It’s sweet, fantastical, and it captures the spirit of the original book. It’s aimed at anyone who likes picture books, which include people like me. It has the same theme and central characters as the original that John Bianchi illustrated, but greatly expanded and enriched. When Jim Warren’s production of it premiered in Toronto at Young People’s Theatre, it became an immediate hit, with adults competing with preschoolers for seats.

The Short Tree and the Bird that Could Not Sing has played across the continent, from Halifax to Seattle, from Toronto to Tucson to Mexico City.

“A moving and totally delightful experience…alternately joyful and sad, it touches anyone, at any age.”—Now Magazine, Toronto

“Let’s be serious here. You can’t really expect a little science, tenderness, friendship and philosophical depth from a 55 minute children’s play, can you? When the show is the elegantly simple Short Tree and the Bird that Could Not Sing, you can.”—Gene Armstrong, Arizona Daily Star