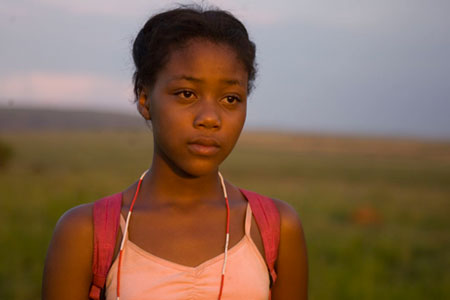 The Story behind Life, Above All

Some years ago, I saw a series of short films called Paris, je t’aime. One in particular knocked me out. I looked up the director, Oliver Schmitz, saw that he worked in Germany and South Africa, and didn’t think about it again. A few months later my friend, Allan Stratton, asked me if I’d be interested in adapting his excellent novel, Chanda’s Secrets, into a screenplay. He said he hoped I wouldn’t mind, but a director was attached to the project—Oliver Schmitz. I instantly said yes.

I met the Canadian producer, Dan Schlanger, and we flew to Berlin to meet with the producers and director. Three or four days were spent discussing the novel, our reasons for wanting to do it, who we thought the audience was, and the kind of movie we wanted it to be. All of us shared a profound concern for the AIDS pandemic in Africa, but felt the film should be as much about human spirit, survival and the strength of family bonds. And that a passion for truth can overcome fear and ignorance.

For the next year I wrote many drafts, connecting with everyone via Skype and email. Then I went to South Africa with the producers and Oliver Schmitz. Soon after landing in Johannesburg, I was picked up by my guide, Jerry Marobyane. I noticed that Jerry had a prosthetic arm. He explained to me that he had been a freedom fighter. He had intercepted a grenade that was thrown at some women and their children—he saved them, but lost his arm in the process. Jerry took me to Cliptown, one of the poorer sections of Soweto. There I was introduced to a sangoma, a native healer, who threw bones and interpreted them, instructing me on how to placate my ancestors. Our next stop was at the gigantic cemetery of Soweto, which has been overwhelmed by AIDS deaths. It was there I saw the children’s graves. They’re marked with a small clay number. People who can’t afford a gravestone bring one of their child’s belongings to mark the grave, so I saw hundreds of basinets, baby cribs, or toys marking infant graves. I was very shaken.

A few days later we all went to the town of Elandsdoorn, two hundred kilometers north of Jo’burg, where the remarkable Ndlovu Medical Trust, an AIDS Foundation, hosted us, giving us access to their hospital, outreach programs and the community. It was there that we visited the homes of children whose parents had passed away from AIDS. One girl we met lost her parents when she was eleven, and had raised her little brother and sister on her own for the last three years. She was a person of incredible strength, but the toll the effort was taking on her was evident.

During that pre-production visit, we decided to shoot the film in Elandsdoorn with as many local actors as possible, in their local language, Pedi. We also decided that Chanda and her best friend, like the children we met in Elandsdoorn, should be twelve years old.

Things quickly came together after that journey. Grieg Buckle became our South African co-producer and the German producer, Oliver Stoltz, raised most of the financing required. Unfortunately, we were not able to find a Canadian distributor in time, which meant that despite the fact that both Allan Stratton and I were Canadian, the film could not be an official Canadian co-production. A fact that really stung when we became an Official Selection at the 2010 Cannes Festival in Un Certain Regard. But for that story, read my letter from the Nice Airport, Roger Ebert’s blog, and the Time Magazine review.