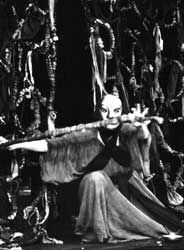 Heracles is a retelling of the myth, which is, to say the least, a pretty gory affair. This is another premiere that Brian Richmond directed with a stellar cast (including Janet Wright and Alex Diakun). I became pretty obsessed with this myth—and the project—and I can’t say it’s the most accessible play for young people I’ve written. But it is wonderfully theatrical. It was the last play I wrote, for a very long time, that was not about the contemporary life of kids.

Visit The Playwrights Guild to order a copy