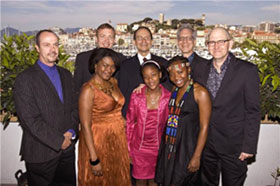 Cannes 2010…A letter from the Nice Airport

I’m sitting in the Nice Airport waiting for my plane to Munich/Montreal/Vancouver. Was up most of the night with the Life Above All team in a rented house in Cannes. Wekas, one of the associate producers, made a celebratory curry. I think it’s safe to say every single person is in shock. I can’t imagine what it will be like for the actresses (Harriet Lenabe and Lerato Nvelase) going back to Jo’burg, or our 13 year star, Khomotso Manyaka, going to her township in northern South Africa. The premiere was astonishing. Yes, we did the red carpet photocalls. Oliver and the actresses stood on a podium while a hundred photographers took their pictures. Then we were escorted to the theatre, our names called, we each stood on the stage and a mike was passed around. None of us said much. I simply said Vive le Festival, which the crowd of 1000 seemed to like. Then the film screened. As the final credits rolled, the magic happened. There was a pause. Then a smattering of polite applause. But it built. Suddenly a bright light shone on the row we were sitting in. The applause exploded. I looked up, we all looked up—and realized we were supposed to stand—because the entire theatre was on its feet. We were surrounded by this astonishing standing ovation, many of the people’s eyes were red from weeping. And after what seemed an eternity (it was clocked by the European papers at 10 minutes), it was done. 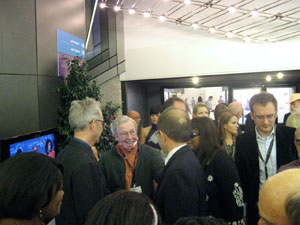 Dazed, I started to exit up the aisle when I was stopped by a woman who said her husband loved the movie and wanted to congratulate me. His throat was bandaged. He touched his heart, and motioned to me, smiling. It was Roger Ebert. He followed me out of the theatre and asked to meet the entire company. I introduced him to the team. He took pictures of everyone. He told us (via handsignals and his wife) that he attended university in South Africa in the mid sixties. So I guess that’s part of his feeling of connection to the film.

That was two days ago. I’m still feeling overwhelmed by the experience. It’s one of those extraordinary events that will never happen again because of the singular magic of this unique festival that so treasures the history of film.

Oliver is an astonishing directorial talent and every aspect of the production is exceptional, so I’m thrilled that he’s getting the accolades he so richly deserves. I loved working with him. He’s a humble, funny, smart and impeccable director.

I’m still heartbroken that it’s not a Canadian co-production as are so many of us, since this was a Canadian/BC project from its inception. But so it goes. First thing tomorrow I drive my daughter, Aliayta, to school, then have a conference call to take notes on how to fix my latest script. At least I got to fly a little before my wings get clipped!