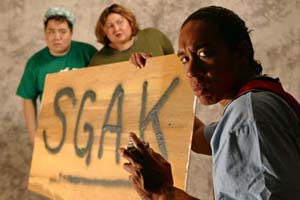 Let’s start your Monday morning with the cheerful news that New Canadian Kid is easily the best show at the Lorraine Kimsa Theatre For Young People in the past five years.To begin with the most important factor, the script by Dennis Foon is every bit as pertinent as it was when he first wrote it in 1981. It’s a story of how a young man from a foreign country and his family face the task of starting a new life in Canada. They go through all the expected pitfalls—failure to communicate, homesickness, racism—but finally come out the other end on their way to being “new Canadians.” This could have been preachy, or maudlin, or tediously obvious. Instead, Foon has made it deftly and wittily entertaining, by the use of one brilliant theatrical device.

Our young immigrant, Nick, is from an unnamed place called “Homeland,” but he and his mother speak English. The Canadians (Mug and Mench) talk in a kind of polyglot gobbledygook from which certain identifiable words appear. With a single stroke, Foon lets us comprehend exactly how Nick feels, because we’re in the same boat. It creates a nice theatrical tension as Nick tries to learn how to play baseball and hockey (where we’re ahead of him), while failing to understand the people explaining the rules to him (where we’re all on the same page.)

Foon’s work is especially skilled when it takes us into the darker areas. There’s one word “sgak,” which we first hear muttered, then shouted and finally written in letters two feet high on the wall. It’s the hateful racial epithet applied to Homelanders and we feel its sting gradually, just like Nick and his mother do. Kudos to director Cherniak for keeping everything moving in such an interesting fashion, as well as guiding her cast to uniformly truthful performances. And to author Foon, the biggest thank you of all. At 23, New Canadian Kid may be too old to be considered a kid anymore, but it’s still one of the newest and freshest shows this season.”
—Richard Ouzounian, Toronto Star